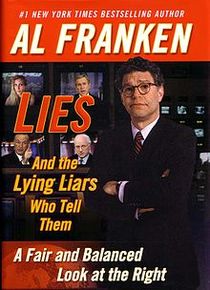 Stuart Smalley was never this big
Doggone it, people loved Al Franken and his goofy affirmations on “SNL,” but they’re really taking notice of his controversial new book about the political right.
St. Louis Post-Dispatch, September 11, 2003

In researching his new book, “Lies and the Lying Liars Who Tell Them: A Fair and Balanced Look at the Right,” Al Franken tried, but ultimately failed, at lying himself.

In one episode, he took a member of his research team to Bob Jones University (a George Bush campaign stop in 2000) and pretended the young man was a prospective student at the evangelical Christian school.

“In order to make it seem plausible, we made up this whole backstory so neither of us had to know anything about Christianity, because both of us are Jewish,” Franken says by phone from Washington, D.C.

“We said that his father had died and his mother had found Christ and wanted him to go there, and I was a family friend. It was this elaborate ruse, and we just felt guilty the whole time.”

The experience taught Franken something – not about Bob Jones University, necessarily, but about himself.

“I’m a bad liar,” he says. “It’s something so foreign to me that people are able to lie every day, like Rush [Limbaugh] or [Ann] Coulter or [Sean] Hannity. It has to be a whole different mindset.”

In “Lies and the Lying Liars Who Tell Them,” Franken takes on the current administration’s policies and the right wing pundits who are clearing a path for them.  Among the latter is Fox News Channel’s Bill O’Reilly, whose run-in with Franken at a book convention earlier this year spiked CSPAN ratings upward and allegedly prompted a Fox lawsuit against Franken, which since has been withdrawn.

“A week after the book expo, Fox wrote my publisher a letter saying they’re considering suing us if we didn’t take O’Reilly’s face and the words ‘fair and balanced’ off the cover,” Franken says. “My publisher was a little concerned, and she called me up to tell me they had done that, and I said, “Okay, one: We don’t give in to intimidation. Two: We don’t have to do it because it’s our right, this is satire. And three: Our letter replying to Fox should read, ‘Please, please, please sue us.’”

Franken has taken on the right before, of course. In 1996, he published “Rush Limbaugh Is a Big Fat Idiot and Other Observations,” which spent over eight months on The New York Times bestseller list. He’s done many other things in his career, too, of course, including writing for “Saturday Night Live,” starring in the critically acclaimed TV show “Lateline,” and penning a number of books, the most recent of which was “Oh, the Things I Know!” a parody of the college graduate guide-to-life genre.

There was, however, enough happening on the political front to pull him back into the fray.

“With this [book], I got angry again,” he says. “With the Rush book, I got angry at the ascendancy of the Gingrich revolution and the attempt to dismantle the EPA and the social safety net. I saw Rush as an easy target: He was their mouthpiece. This time, the actual right wing media has grown.

“It now includes Fox, of course, the Wall Street Journal editorial page, the Washington Times, the New York Post and these books by people like Coulter and Hannity that are bought in bulk by right-wing guys. There are also the think tanks that spew out nonsense, and talk radio. I just felt it was time for me to come back and confront the lies and bullying that’s going on.”

As a comedian, Franken sees things a bit differently than if he were a straight-up political commentator. “It’s fun to do different things,” he says. “As a political commentator, I can use the chops I’ve developed as a comedian. That’s what I do in the book. A lot of my comedy is political, but a lot of it isn’t. I’m actually speaking to you from USO headquarters. I’m going to do my fourth USO tour in December, in Afghanistan and Iraq. When I do those things, I don’t do political humor like I do in the book. You know, you don’t want to call the commander in chief a liar when these guys have bullets whizzing past their heads.”

Then, too, Franken is a bit of a policy wonk, and is just as credible expounding on the merits of a bill on mental health parity sponsored by his late friend, Minnesota Senator Paul Wellstone, as he is when telling a joke.

“My family was always interested in politics,” he says. “We watched the evening news when we ate dinner and we talked about it. My dad was a lifelong Republican until 1964 and my mom was a Democrat all through her life. I came of age during some very important events: the civil rights movement and the Vietnam War. So I was politicized at a very early age.”

The disadvantage to doing his kind of books, Franken says, is that he actually has to familiarize himself with what the opposition is saying, a courtesy not often extended by the right to the left. He has to spend hours listening to Limbaugh, watching Fox News and reading screeds like Coulter’s “Treason.”

“It really was like torture,” he says. [Coulter’s previous book] “Slander” came out when I was working on another project, a screenplay. I started to read her thing and then went to work on the screenplay. I had to stop reading it. I found myself getting so angry that I couldn’t think about the screenplay.”

To Franken, Coulter is “the reigning diva of the hysterical right. Or rather, the hysterical diva of the reigning right.” He devotes two chapters to her in the book, one of which is titled “Ann Coulter: Nutcase.” But he says there are actually Republicans who agree with him about her – off the record, of course.

“I’ve talked to a lot of Republicans and conservatives while researching this book – some of whom I’ve had arguments with and some of whom I’d be in the middle of an argument with – and I’d say I’m doing a chapter on Ann Coulter and they’d go, ‘Look, off the record, there’s something wrong with her.’”

Of President Bush, Franken says he’s gotten a free pass because he comes off as a loveable bumbler. “It’s that whole ‘I don’t mind being misunderestimated’ thing, which meant he didn’t mind being underestimated for the wrong reasons. I think people have underestimated how conniving and dishonest he is. That’s what his word ‘subliminable’ was. He was saying, subliminally, ‘I am able to be president.’ That was amazing. He said it four times in a row. I don’t think it was subliminable.

“On the other hand, to be fair to Bush, there’s more to being president than being articulate, intelligent, and knowledgeable.”