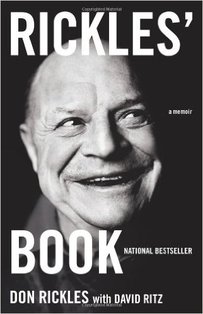 Don Rickles has earned the right to look back.

The legendary comedian and actor has been doing a fair amount of reminiscing lately, having collaborated on the recent New York Times bestseller, “Rickles’ Book.” He’s also the subject of a forthcoming John Landis-directed documentary, “Mr. Warmth: The Don Rickles Project.”

But Rickles, 81, isn’t dwelling too much on the past, continuing to perform onstage in Las Vegas, Atlantic City, and all points in-between. He’s also looking forward to once again voicing Mr. Potato Head in “Toy Story 3,” which is slated for release in 2010.

Asked about his health and his busy schedule, the 81-year-old performer says, “I’m still talking, so that’s a good sign. I have my health. I still have the energy. I’m as quick as ever, thank God. My dance card’s pretty full these days, and I’m very happy about it.”

Rickles, who will perform at the Blanche M. Touhill Performing Arts Center on Sunday, spoke with the Post-Dispatch by phone from Los Angeles.

Q: Why did you decide to write a book? What was the experience like for you?
A: David Rosenthal, who is the CEO of Simon & Schuster came out to L.A. and said, “Don, we’re interested in having you write a book.” I said, ‘Oh, I can’t write a book. Why would you want me to write a book?” He said, “Because it’s you.” I found that an interesting remark. So we went to work with David Ritz, who wrote the Ray Charles story and many other books.

I didn’t want to do the regular stuff about, you know, the guy on the lower east side, his father shot his mother and his aunt was drunk and stuff like that. First of all, that isn’t my life. I wanted to write about the outstanding incidents that I could recall from my career and my life.

Q: How did your act develop? Because you don’t tell jokes, per se.
A: Thank you. That’s very nice to say, because a lot of people say I’m a stand-up, and I’m not. I’m a theatrical performer. I’m more of a guy who talks to people and talks about life and exaggerates everything.

I started out in joints, strip tease joints. They’d have about five or six girls. They were practically fully dressed compared to what goes on today. And I was the comedian between their changes. I would come out and do impressions and tell jokes badly. Still to this day, if you gave me a thousand dollars, I can’t tell a joke. But I can make a situation funny because of my attitude. Attitude is a big factor with me.

Q: What is the origin of your calling people “hockey puck?”
A: You got me. I’m a New York guy, born and raised, and to this day, if I walk down the street, guys in hard hats will be working on a building, and they’ll go, “Hey hockey puck, how are ya?”

I believe it started in the joints years and years ago, when I was a young man, frustrated, trying to get people’s attention. A guy would yell out to me about something and I’d say, “Don’t be a hockey puck.” Ask me why I picked that word, I don’t know. But I’ve got a room full of hockey pucks.

Q: You’re not always mentioned as a member of the Rat Pack, but you were in on some of their antics. For a while, that was the center of the entertainment universe.
A: Oh yeah, to be around Frank was. He was the guy. I was part of the Rat Pack in the sense that I was in the steam room with them and I was with Frank a great deal of the time. I worked with him the last two working years of his life. We had great times together.

Q: Let me get some quick takes on some of the entertainers you’ve gotten to know over the years, starting with Johnny Carson.
A: He was a magnificent man. He was a loner socially. I was very fortunate to become his friend. When the light went on, he had a great quality to make guests look good. Every time I was on with him, it was an event. Johnny had that real special style.

Q: Did you know Dean Martin very well?
A: Oh sure. I was at his funeral. That’s a sad thing to say. But I knew Dean from the Rat Pack days. He, too, became a friend, but again, he was a loner. He wasn’t much for going out and partying. He was a very low-key guy away from the stage.

Q: It’s interesting that you’re such good friends with Bob Newhart, because you’re such opposites as performers.
A: That’s the story. We laugh at the same things socially, and we’re apples and oranges onstage. Bob is very bright and has had great success with his television series. He’s a wonderful star. But mainly, our wives and our kids and our grandchildren, we’re all one package. Every Christmas and every holiday of my faith, we’re always together. It’s great.

Q: What are your plans for the future?
A: In the future, I plan to go on living, unless you hear something. Next year I’ll be in Vegas again, and Atlantic City.  I keep going with the thought that, when the day comes to retire, I’ll know about it and the audience will let me know.