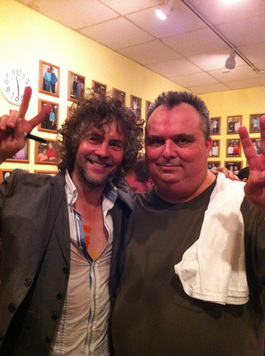 Wayne Coyne and the sweaty author in 2010 after a second onstage stint with the Lips
Lips Service
Squads of rock band’s fans suit up for Santa Claus vs. the Aliens
A version of this story appeared in the St. Louis Post-Dispatch, August 20, 2006

Standing between a pair of clothing racks, one holding futuristic, Jane Jetson-style dresses and green alien masks, the other with Santa Claus suits in the traditional red and white, Justin Crockett addresses a hastily gathered roomful of people backstage at the Pageant on a Saturday night.

“Welcome to the wonderful world of the Flaming Lips!” he says.

Crockett is a man with a scruffy beard, a Drive-By Truckers baseball cap and the power to make a singular rock and roll dream come true. He is the Flaming Lips’ “animal wrangler” – so called because it is his job to recruit fans who will don costumes and dance onstage with the band.

Until recently, the costumes were of big, furry bunnies, bears and other animals.

“Now we have Santas and aliens, but the job description is still the same,” Crockett says. He finds his charges on the Pageant floor while two opening acts, the Magic Numbers and Sonic Youth, are playing. “I try to find fans that look interesting and like they’ve got some energy they wouldn’t mind bringing to the stage,” he says.

Fifteen minutes before the Lips are scheduled to perform in front of  a sold-out crowd, Crockett brings the recruits into the costume area to change clothes and receive final instructions. Among the throng of 30 or so is a trio of women who go by the names Roxy Ruthless, Eva Lasting Jawbreaker and Tornado Alli – members, it turns out, of the fledgling St. Louis roller derby team the Arch Rivals. There’s also a newlywed couple, Troy and Lucia Grillo, who have driven from Manhattan, Kansas, after communicating with Crockett via the Lips’ MySpace page. Friends Stacy Lucas and Rachel Josar – both St. Louisans who attend Mizzou – came in from Columbia. And P.J. Green, from Riverton, Ilinois, arrived outside the Pageant wearing his own Santa suit – borrowed from his father, actually – though he didn’t have a ticket.

“I couldn’t get one because it was sold out,” he said. “I’ve just been hanging around and [Lips singer Wayne Coyne] let me in. I’m going to dance my ass off,” he promised.

Finally, there’s a reporter in the room – me – who, though not particularly born to the role of Santa Claus, has, you could say, grown into it over the years.

We Santas merely slip the costumes over the clothes on our backs. But with their slinkier sleeveless dresses and the skimpy halters that go underneath, the aliens-to-be, all of them women, have little choice but to strip down to their underwear. For a minute, the scene is a little like the chaotic backstage area of a Paris runway show – or at the very least, the dressing room of a club or two over on the East Side.

So who are the Flaming Lips, and what have they done to deserve this level of devotion from their fans?

A psychedelic pop/rock band from the unlikely hometown of Oklahoma City, the Lips have been the embodiment of the term “cult favorite” for more than two decades. Though they’ve recorded for a major label since 1990, they’ve only enjoyed one hit single, the borderline novelty song “She Don’t Use Jelly” in 1994, and didn’t earn a gold album or win a Grammy until 2002’s “Yoshimi Battles the Pink Robots.”

The lack of fame has allowed longtime bandmembers Coyne, Michael Ivins and Steven Drozd to create their own phantasmagorical musical universe via albums with titles such as “Hit to Death in the Future Head,” “Transmissions from the Satellite Heart” and “Clouds Taste Metallic.”  Coyne’s lyrics can be surreal and puzzling, but they often deal with profound issues such as religion, the battle of good and evil, and the quest for the meaning of life.

Around the turn of the century, the band began expanding its sound with the lush, sweeping orchestrations heard on the albums “The Soft Bulletin,” “Yoshimi” and their newest release, “At War with the Mystics.” Their live show, which always included enough manufactured fog and strobe lights to cause an epileptic fit, has grown proportionally, but in a more whimsical fashion, incorporating confetti cannons, bubble machines, giant balloons, hand puppets, streamer guns, roadies dressed as superheroes, and of course, the costumed dancers.

“We always say that you could never wake up one day and say ‘Here’s what we’re going to do’ and come up with this,” Ivins says before the show.

Coyne adds, “There’s an evolution to all these things. The animal costumes came about when a friend of ours in Oklahoma City took some mushrooms and came to a show as a giant rabbit. Afterwards, people said, ‘Wow, you had people walking around in costumes. What a great idea!’ And I thought, ‘Okaaaayy….’”

The band bought a few costumes and put their roadies in them, and eventually Ivins and Drozd wore them, too, minus the heads so they could sing. (Coyne remains the band’s fashion plate, dressing in expensive Italian suits, albeit ones that are often stained with stage blood.) But the Lips weren’t at all sure that their fans would want to get up onstage and wear the costumes, too – that is, until they asked them.

“We just thought, ‘We’ll take whatever we get,’ Coyne says. “But every night there was more than enough people. And you’d see that they were just these freaks who can’t believe they’re up there with their favorite band, which makes it even better.

“That’s the part of it I don’t think we could have ever predicted. The audience, seeing people like themselves up there smiling and having the time of their life. It’s a contagious thing.”

Little can prepare you for the first few minutes of a Flaming Lips show. As the band files onstage to a loud classical fanfare, confetti cannons and fog machines go off, dozens of huge yellow balloons begin bouncing around the hall and the cadres of Santas and aliens on either side of the stage shine handheld spotlights out at the crowd.

Our instructions are to shine the lights throughout the first song and then to turn them off until the fifth song, the screaming instrumental “Yoshimi Battles the Pink Robots Pt. 2,” in which we are to stage a “battle” between our factions with our lights.

Other than that, our only job is to dance, bounce balloons back and forth with the crowd and to further the positive vibe sent out by the band. At one point, Coyne claims that the feeling achieved between the Flaming Lips and their audience ultimately has the power to change the world.

It’s a trippy 60s-sounding sentiment perhaps, but when you’re standing onstage in a sweaty Santa suit, calves exploding from pogo dancing for the first time since 1980, it all somehow makes sense.

It’s not what goes out from the stage at a Lips show that’s important, but rather what comes back: the heat from the fans, packed to the rafters; the roar of their applause and the sound of them singing along to every song; and the look of them, some in crazy costumes themselves, a beatific smile on each of their faces.

At one point, Coyne stopps the show to acknowledge the 16th birthday of one of the Santas, Erin McKinstry, and the band and audience sing “Happy Birthday.” It was a moment that echoed something Coyne said before the show: “We are you and you are us. I came from the audience. To me, the audience makes all the difference. We really do come here to be with them. A lot of times it’s the other way around, like ‘We’re gonna show up and you’re gonna come and see us.’ In our case, we’re here to see you. The way our show is now, without the audience being able to freak out and surrender to all this stuff, I don’t think it would be anything.”

After the show, the dancers quietly turn in their costumes and receive a souvenir T-shirt before going through the stage door and back to their normal lives. But a few stick around to talk about their experiences.

“It was more fun that I thought it would be,” Lucia Grillo says. “I went more crazy than I thought I would.”

Arch Rival Tornado Alli says she “broke a heel and broke my eardrums.”

And birthday girl Erin McKinstry thanks her sister Rebecca for bringing her to the show, enthusing, “Oh my gosh, I’ve never experienced anything like that before, ever. It was the best birthday present I got.”

In a way, that was true for all of us, even if it wasn’t our birthday.