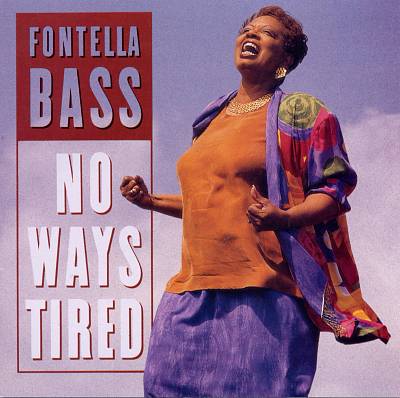 As a rhythm-and-blues artist in the 1960s, Fontella Bass made her reputation singing “Rescue Me.” But who can listen to her singing gospel music now and doubt that she’s been saved?

Bass has survived more than her share of travails in the music business and in life (including the recent death of her father), but this week she is coming back strong with “No Ways Tired,”  a joyous and passionate album of gospel and gospel-oriented pop released by the Elektra Nonesuch label as part of its prestigious American Explorer Series.

It is the same series that has spawned two albums in recent years by St. Louis rock ‘n’ roll pioneer Johnnie Johnson, which Bass believes is no coincidence. “They know we still got it goin’ on in St. Louis,” she says with a laugh, speaking by phone from Elektra’s New York City office.

This week, Bass has plenty going on all by herself. Sunday morning, she’ll grace services at the Abyssinian Baptist Church in Harlem. On Tuesday, she will perform a benefit concert for Tibet House at Carnegie Hall, sharing the eclectic bill with avant-garde composer Philip Glass, rocker David Byrne, country singer Jimmie Dale Gilmore and folk-rock waif Natalie Merchant, among others. And both Wednesday and Thursday nights she’s booked into the Greenwich Village hipster hangouts the Fez and Sylvia’s in Harlem, respectively. (No St. Louis performances are scheduled as of yet.)

Bass says the current upswing in her career is the result of a change she made in her life five years ago. Though she had been raised in the church by a sternly devout grandmother, Nevada Carter, and her gospel-singing mother, Martha Bass, she says “I didn’t start livin’ ‘til 1990. That’s when I came into Christ on the real side and chose him as my savior.”

Since then, she has been performing gospel music exclusively, although she admits that it was more an aesthetic than a religious decision.

“It’s not a matter of doing secular music or doing gospel music,” she says. “It’s just that gospel is what I feel I do best, and also, that’s where I was brought from as a child. It has nothing to do with Christianity or who you believe in, really. It’s just my choice as an artist.”

Ironically, “No Ways Tired” exists in part because of Bass’ skills as a singer of secular music. Last year, Hamiet Bluiett of the World Saxophone Quartet (and another St. Louis-area native), summoned Bass to New York City to sing on his band’s most recent album, “Breath of Life.”

“They needed a vocalist and knew I was a diva,” she says, bursting into laughter at her feigned immodesty. “No really, he knew I could do it, so it was like, why not?”

Blueiett explained, “I’ve known Fontella since I was a kid, when she was singing in my aunts’ and uncles’ clubs on the East side in the early ‘60s. Fontella goes to my mother’s card parties over in Lovejoy, and she’s a friend of the family, so she’s always somewhere at the top of my brain when I’m thinking of vocalists. I went to [Nonesuch general manager Bob Hurwitz] and said I wanted to use a vocalist on the album and asked him what he thought: should we get a male or female? He said, ‘Well, saxophones always make me think of a woman. Who do you have in mind?’ I said, ‘Fontella Bass,’ and he turned around in his seat and looked at me and said, [excitedly] ‘Do you know her? Can you get her?’ I just jumped on the telephone and that was it.”

Hurwitz was so impressed with Bass’ performance on the three tunes she sang on the WSQ album – “Sufferin’ With the Blues,” (which Bass also arranged), the old Ray Charles hit “You Don’t Know Me” and Oliver Lake’s spacey “Breath of Life” – that he offered her a recording contract.

“I told him that I had been working secular but that gospel was my preference, and he said, ‘Hey, great,’ Bass says. “It was that simple.

“No Ways Tired” is a sequel of sorts to the remarkable but little-heard release “Everlasting Arms,” which Bass recorded for the Silver Spring label in 1992. That album features Bass unaccompanied except for her own piano playing, singing songs in the manner you’d hear her perform at Mount Beulah Missionary Baptist Church in University City, where she is the church musician.

Many of the songs on that album, including “This Little Light of Mine,” “You Don’t Know What the Lord Told Me,” “No Ways Tired,” and “Leaning on the Everlasting Arms” are reprised on her new effort, some of them with considerably fleshed-out arrangements and stellar guest appearances by the likes of Bluiett, R&B/jazz saxophonist (and Kirkwood native) David Sanborn, and her ex-husband Lester Bowie, trumpeter with the Art Ensemble of Chicago.

Perhaps the most surprising aspect of the album is Bass’ inclusion of a pair of pop tunes: Bill Withers’ “Lean on Me” and the Burt Bacharach/Hal David chestnut “What the World Needs Now.”

“Those Songs are still spiritual,” she says. “We need a lot of love in this world, you know that. So if somebody’s gonna listen to Fontella, why can’t Fontella give them some kind of message of what they need in life?”

Bass continues: “You know, when I first started singing ‘No Ways Tired,’ a friend of my mother’s, Miss Lois Lane – not Superman’s girlfriend, her name really is Lois Lane – she said, ‘That’s your song.’ And when I would appear on programs, I would always do ‘No Ways Tired.’ She said, ‘That song, it’s gonna work for you, and it has, and that’s why it’s the name of the album. So she was right.”