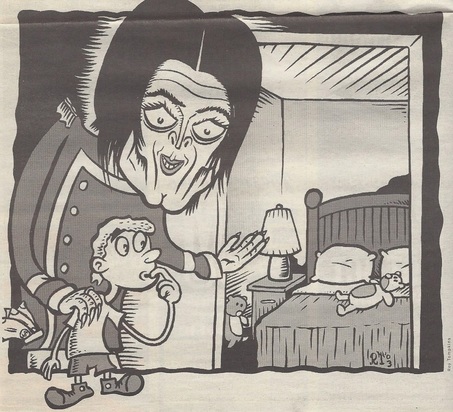 Man in the Mirror
Michael Jackson proves he’s even weirder than we imagined
Riverfront Times, February 19, 2003

Michael Jackson is a fucking freak.

He’s not just weird or eccentric. Not merely odd, a little off, whacked, or a few bricks shy of a load. Not simply out in left field or, to use one of his own album titles, off the wall. Not cracked, not mental, not mad as a hatter or off his chump.

But why exactly is this news?

It’s news because, for the most part, we’ve never been able to see the evidence with our own eyes or hear it with our own ears. We’ve read the tabloid headlines and gotten glimpses into his tattered psyche in dribs and drabs on Entertainment Tonight and in daily gossip items in newspapers. Our appetite for infotainment knows no bounds, it seems, and it was easy enough for Jackson to amuse himself by planting a lot of that stuff in the press himself. He wants to buy the Elephant Man’s bones, we were told; he sleeps in a hyperbaric chamber to stave off the aging process. In Jackson’s head, these blurbs were image-enhancers. If he could be seen by the world as benignly eccentric, his name would stay in the news, his fame would increase and he wouldn’t need to reveal anything about his true self. The press always wants red meat. Let ‘em eat cake, he figured, and his approach generally worked.

On TV, we saw Oprah kiss Jackson’s ass during a live broadcast in 1993, just before the shitstorm broke over his alleged sex abuse of a teenage boy. In 1995, ABC’s Diane Sawyer lobbed one softball after another at him in an interview that was so hilariously bungled it should have ended her career right then and there. No such luck.

Earlier this month, when British journalist Martin Bashir’s interview with Jackson was set to air, veteran followers of this never-ending circus had every right to be skeptical. How would Bashir succeed where so many others have failed in bringing to light anything that resembled an honest portrait of this twisted man-child? Perhaps the wisest move made by Bashir was to interview Jackson repeatedly over the course of eight months. Oprah and Sawyer got only one shot apiece. If Jackson was less than forthcoming on a particular issue, there was little or no recourse. Bashir spoke with Jackson at Neverland, the singer’s 3,000-acre ranch in California, and also in Las Vegas, Berlin and Miami.

Jackson has railed against the interview in the days since its airing, claiming that Bashir distorted the truth and that he felt “more betrayed than ever before.” Some have even referred to the interview as a lynching. But if it was anything of the sort, the only thing Bashir may be guilty of is handing Jackson plenty of rope to do that job himself. “I am Peter Pan,” the 44-year-old Jackson said with complete seriousness. He also said that climbing trees and having water-balloon fights were his favorite activities, that Tatum O’Neal tried to seduce him when he was twelve and that he’s had only two plastic surgeries, both of them on his nose, as far as he “can remember.”

And let’s be honest here – who among us hasn’t forgotten at least one or two of the plastic surgeries we’ve had?

None of that is actionable, however – just the stuff and nonsense of day-to-day megacelebrity life. Far more damning were the conversations about his own family. Two of his children, Prince Michael and Paris, were the result of his short marriage to nurse Debbie Rowe, who Jackson says bore him the children as “a present” and who has no contact with them now. Regarding the mother of this third child, Prince Michael II (known affectionately as Blanket – yes, Blanket), Jackson contradicts himself. During one portion of the interview, he claims that the mother is someone he had a relationship with. Later, he says she was unknown to him but was impregnated with “my sperm cells.”

Blanket was the baby Jackson famously covered with a veil and dangled from a hotel balcony in Berlin. When Bashir interviews him soon after the incident, Jackson seems a changed man from the person seen happily climbing trees at Neverland. He’s wild-eyed and jittery, jamming a bottle into Blanket’s mouth and bouncing him frantically on his knees. All the while, the crowd outside is calling to him. It’s hard to say whether Jackson is simply jazzed by the level of fame he’s achieved or whether it scares the hell out of him.

Equally disturbing was Jackson’s description of Paris’ birth: “I was so anxious to get her home after cutting the cord – I hate to say this – I snatched her and just went home with all the placenta all over her ... I just got her in a towel and ran.”

It’s hard to imagine that anyone who’s thought about the charges brought against Jackson in 1993 (which were dropped after Jackson paid the plaintiff a reported $25 million) didn’t shudder with disgust at that moment. Jackson claims that he slept on the floor but did admit that he’s “slept in a bed with many children,” including Macaulay and Kieran Culkin.

In a later interview, he defends his earlier remarks by telling Bashir, “When you say ‘bed,’ you’re thinking sexual. They make that sexual; it’s not sexual. We’re going to sleep, I tuck them in and I put a little like, er, music on, and when it’s storytime, I read a book. We go to sleep with the fireplace on. I give them hot milk, you know, we have cookies. It’s very charming, it’s very sweet; it’s what the whole world should do.”

It’s hard to know what exactly Jackson hoped to achieve with this interview. If all he wanted was a spike in record sales, he may have gotten it. In London, at least, it was reported that sales of Jackson’s old albums increased by as much as 1,000 percent.

But in the long run, Jackson may be forced to face the truth: He was betrayed not by Bashir but by his own willingness to show himself in full freak mode. It’s his life and opinions that are out of step with the rest of the world – even a world such as ours that accords celebrities so many privileges. Jackson may ultimately wish that he had stayed as silent as the Sphinx, another famous figure whose secrets may be better left untold – and whose nose, not incidentally, slowly but surely disappeared.